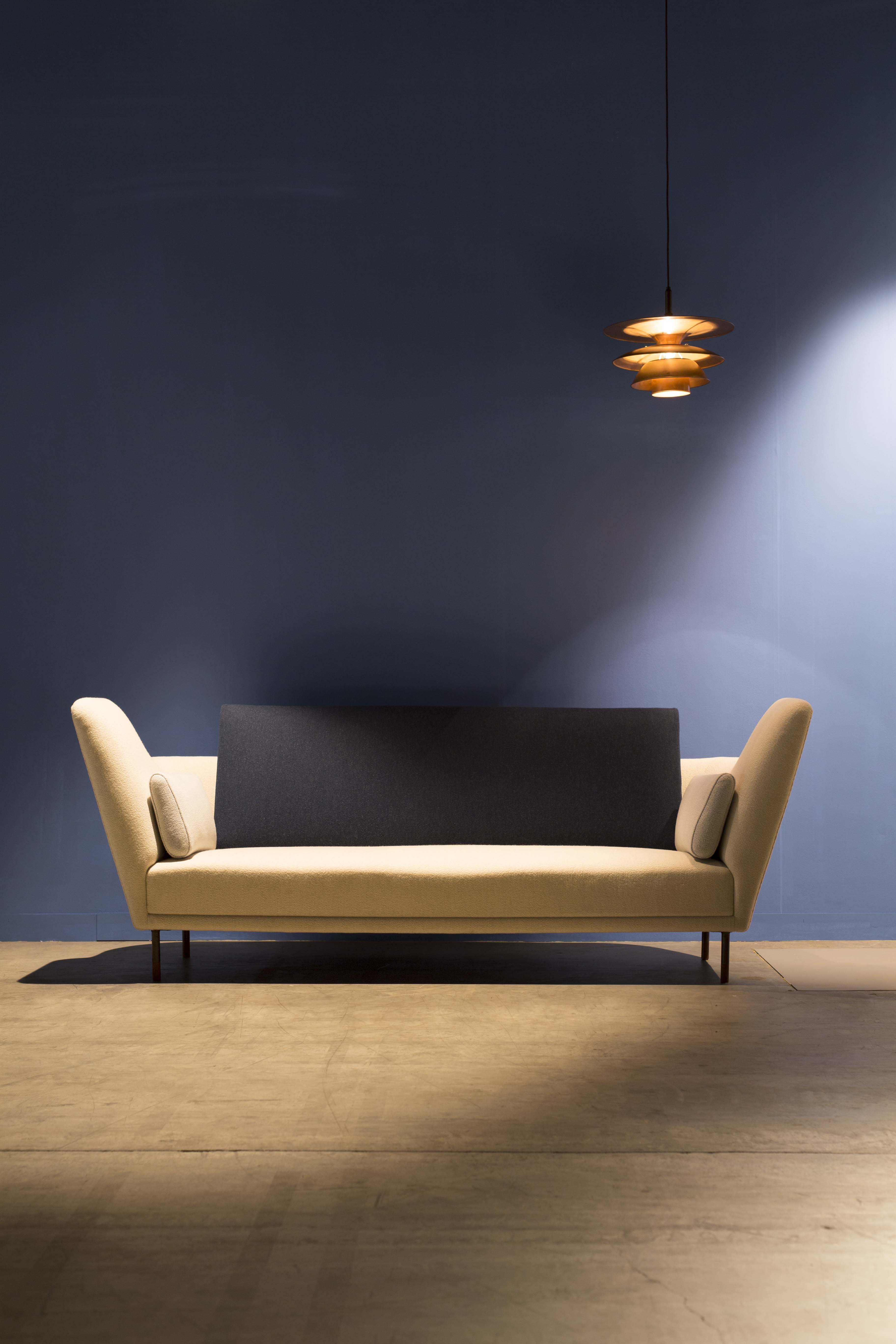 Galleri Feldt’s Design Miami/ Basel 2018 installation included the Tivoli Sofa by Finn Juhl, which was first presented at the 1957 “Tidens Møbler” (“Furniture of the Moment”) exhibition, organized by the Greater Copenhagen Furniture Dealers’ Association at the Tivoli Gardens Concert Hall. Its shape is often referred to as “abstract,” a word often associated with Finn Juhl because of his taking inspiration from abstract paintings by the likes of Picasso and Hans Arp. But the Tivoli Sofa’s form has a concrete purpose, and it constitutes an opening up of the sofa’s basic form to allow for more flexibility in its use. The arms are heightened and tilted outwards to give support to the sitter’s back, should she choose to sit or lie with her legs up on the sofa, and the cutouts where the arms meet the outside back allowed her to rest her hand in that position. The back cushion is loose, as are two small side cushions, which serve as armrests in a regular seated position. What was created was a kind of sofa within a lounge chair—two functions which were articulated with contrasting upholstery colors for the sofa’s body and its loose elements. 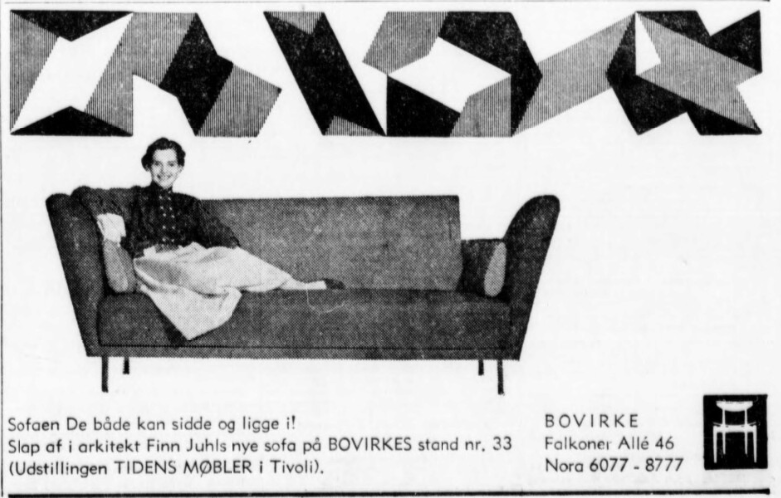 An ad for the Tivoli sofa at the time of the 1957 exhibition. The text reads, "The sofa you can both sit and lie in! Relax in architect Finn Juhl's at BOVIRKE's stand no. 33 (The exhibition TIDENS MØBLER in Tivoli).

After the Tivoli exhibition there was an attempt to manufacture and market the Tivoli Sofa to the public, but the design did not catch on, and very few examples were produced. One humorously didactic ad campaign gives a sense of how unconventional the sofa was, and suggests that it could become a locus of pleasure and togetherness in a household. Titled “We live in a sofa!”, the add features a text written in the colloquial voice of a young woman named Pernille, describing the process of buying and using the sofa with her husband, Bamse. Captioned images depicting the couple’s “adaptation” to the sofa function as a visual shorthand for the text’s essential message, which can be summed up as: “buy big!” 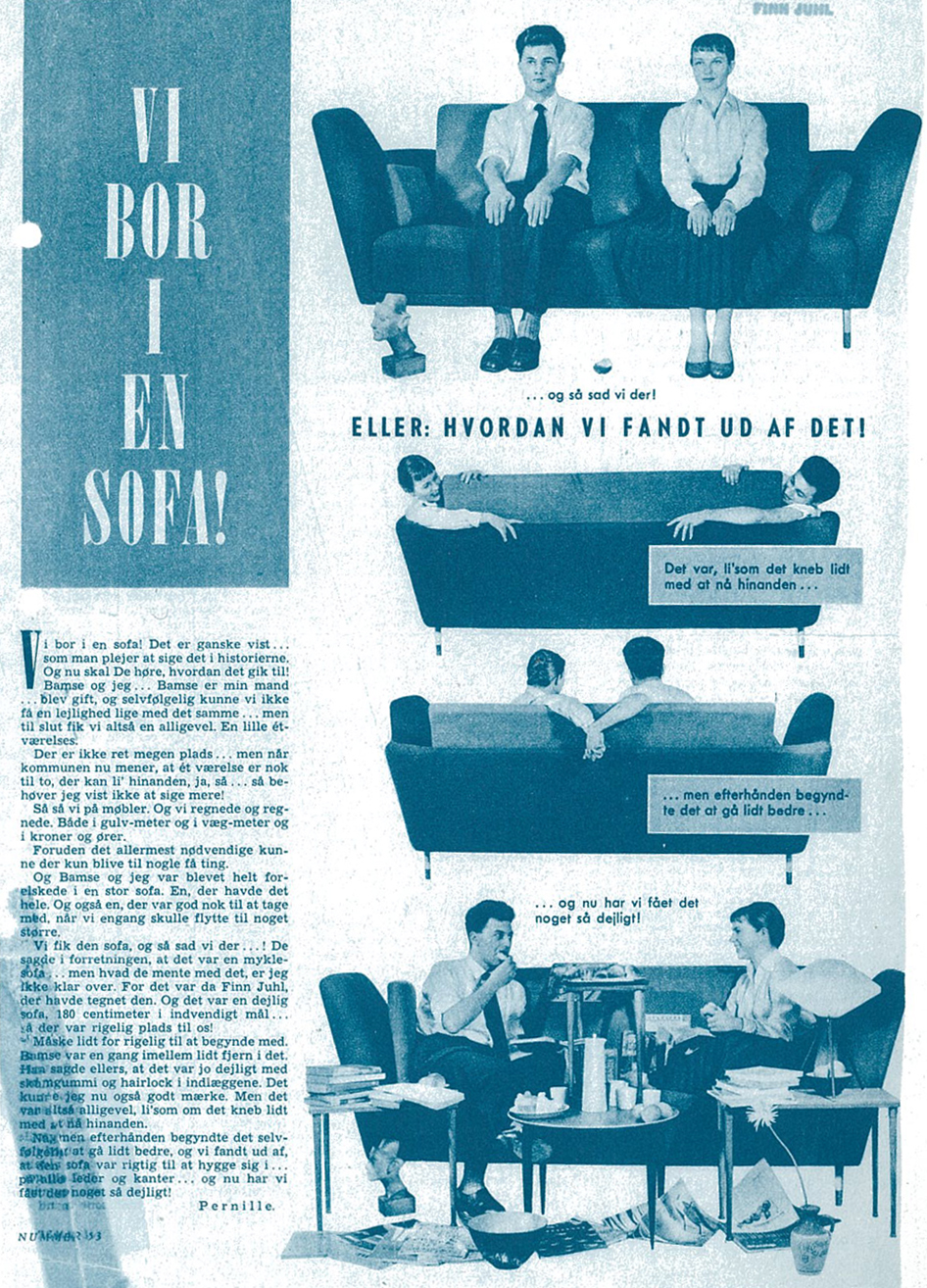 As far as sofas are concerned, this was a counterintuitive idea given the small size of the average Danish apartment of the period, during which a housing shortage forced many to live in cramped conditions. The ad acknowledges this—Pernille hints at the long amount of time it took the couple to find their tiny one-bedroom, and mentions something about how their municipal officials claim that “one bedroom is enough for two who like each other.” (The subtext seems to be that the government is making excuses for its inability or reluctance to seriously address the shortage.) She buys the sofa because she falls in love with it, and figures it would be a good fit once they move to a bigger place. The purchase of the Tivoli Sofa is thus painted as an aspirational move, an object one should buy in the present to fit a brighter, bigger future.

The top image shows the couple as yet unused to the sofa, sitting stiffly upright, hands on knees, staring forward and not interacting. The implicit suggestions is that this is the type of sitting of bygone days—excessively proper. The caption reads “…and so we sat there!” 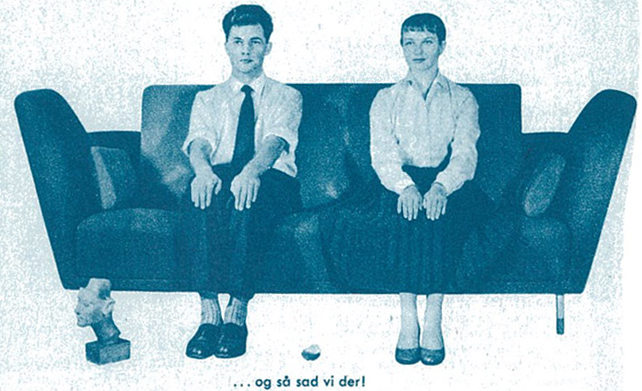 But the Tivoli Sofa opens new possibilities if one only finds out how to make the best of it. A subtitle in all caps bellow the first image presents this alternative: “OR: HOW WE FIGURED IT OUT!”

In the following image, the two find themselves far from each other on the sofa: “It was as if it was hard to reach each other…”, the caption reads as we see the pair playfully stretching out towards each other from opposite corners of the sofa, behind its elevated cushion, as its back is turned to us.

“…but afterwards it began to go better…”, we learn next—a statement illustrated by the pair sitting with their clasped hands hanging over the backrest.

In the final image, we see the two lounging casually with feet raised on the sofa, leaning against its high armrests, surrounded by a mess of books and magazines that spills from the sofa over to two side-tables and down to the floor, with stacked tray tables bearing buns and coffee and everything one would want for a nice breakfast or afternoon snack: “…and now we have it so nice!” 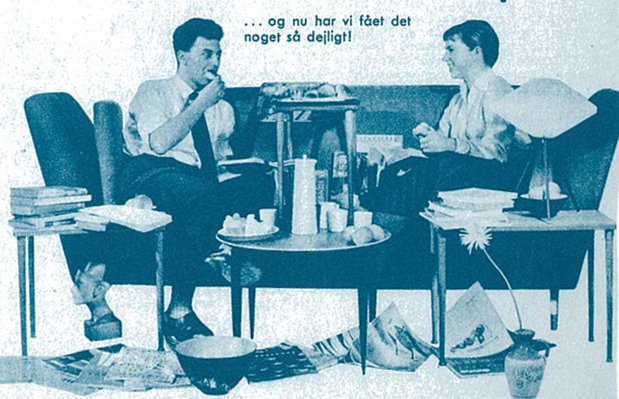 The Tivoli Sofa is thus branded as the relaxed choice of the youth—perhaps not the most practical purchase you could make, but one that does away with old restrictions, gives new possibilities, and will comfortably (almost) contain both you and your mess. It is unfortunate for Finn Juhl and Bovirke that the add didn’t succeed in convincing consumers of this, but at least today it gives us a little window into the changes that were taking place in Danish life and Danes’ mentality in the mid-century.