In October 2017, Whitechapel Gallery in London opened a site-specific installation by Leonor Antunes that features rare hanging jewelry display cases by Nanna Ditzel (1923–2005), courtesy of Gallery Feldt and the Ditzel family. Titled, “the frisson of togetherness,” the installation is composed of hanging and floor-based sculptures made from materials including metal, leather and rope, and illuminated by lamps designed by the artist. The floor, in turn, is covered by a geometric pattern made of cork and linoleum, based on a drawing by British artist Mary Martin (1907-69). Nanna Ditzel’s illuminated display cases hang over it, bearing jewelry made by Brazilian artist Lucia Nogueira (1950–98). 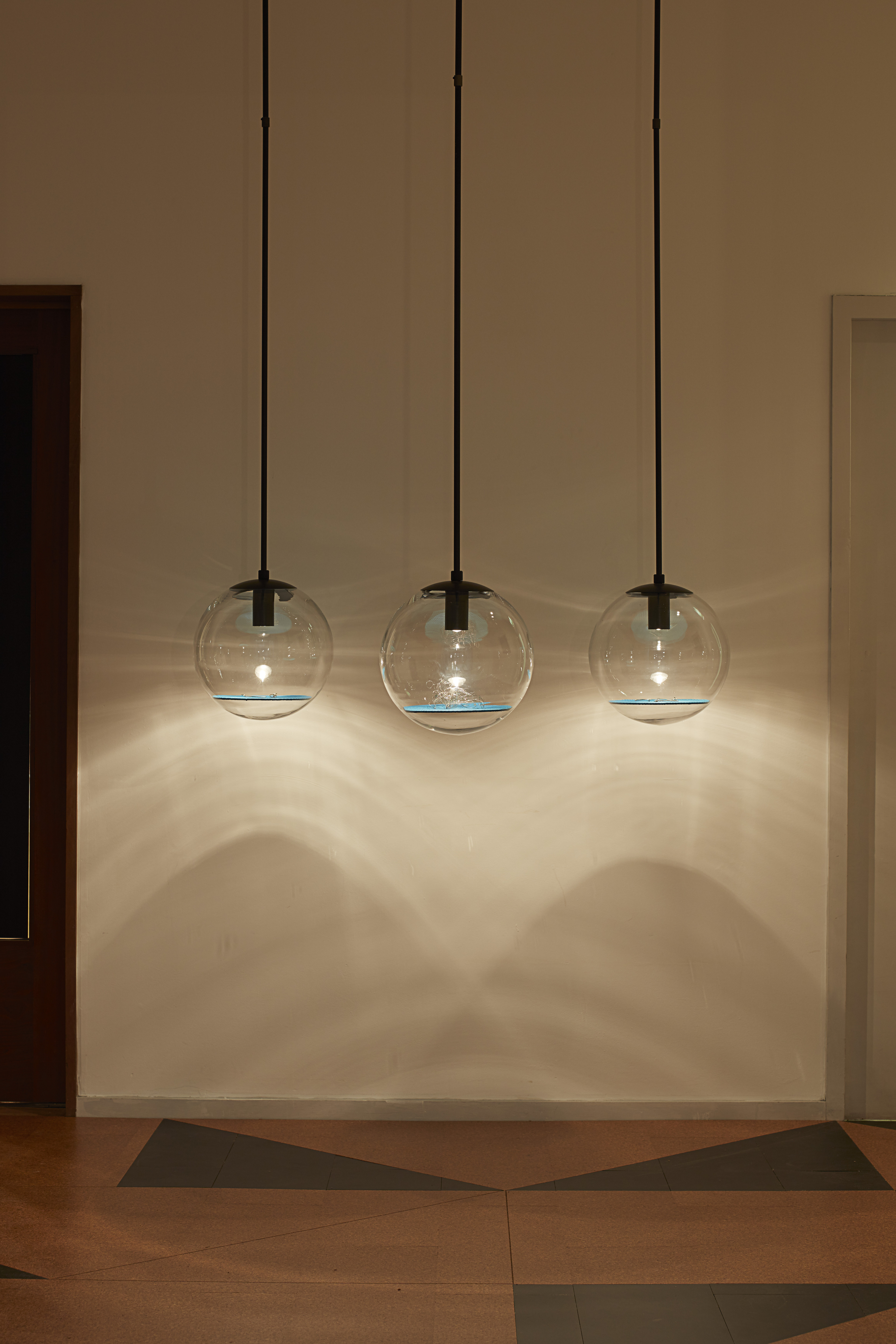 The installation gathers together references to overlooked figures—women in particular—in the history of twentieth-century architecture, art and design. This has been a central concern for Antunes, who has studied and drawn on the work of figures such as Swedish-born architect Greta Magnusson Grossman (1906-1999) and textile artist Anni Albers (1899-1994), among others. Antunes has been particularly interested in the intersection of Modernism and craftsmanship, and her work often involves a meditation on the historicity of materials associated with both handicrafts and industrial production, such as cork, leather, rope, linoleum and brass. 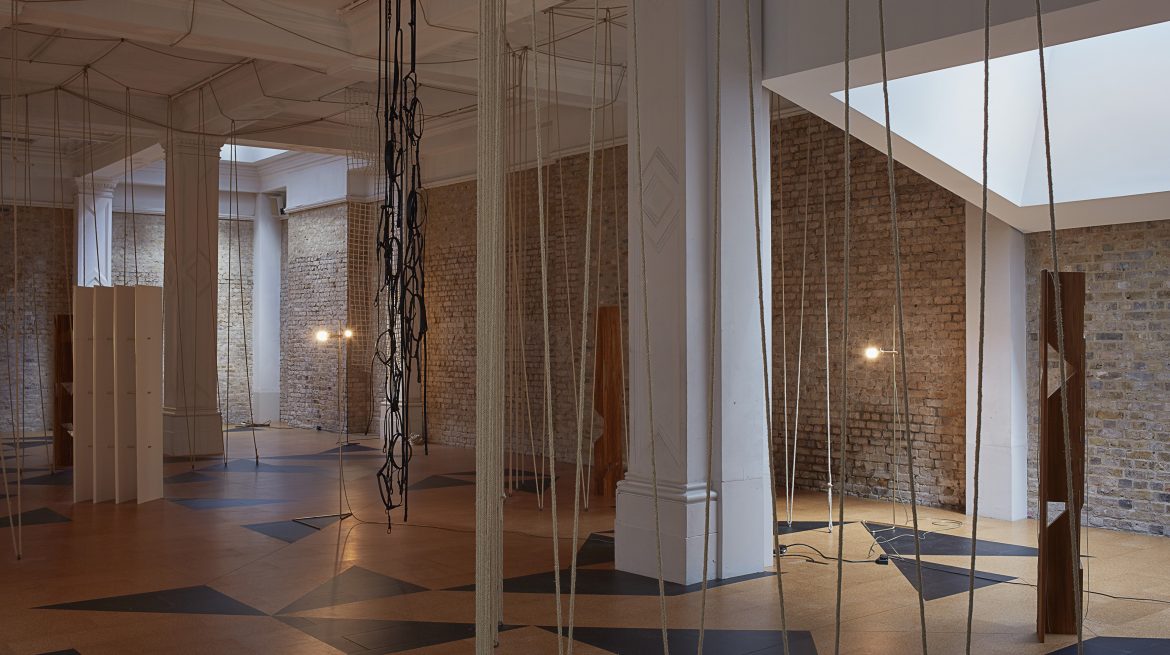 Galleri Feldt has had a long-standing collaboration with Antunes, who in 2015 produced the Olga lamp at Galleri Feldt’s request. Constructed of two steel tubes—one tall (167 cm) nested inside a shorter one (100 cm)—the lamp gives light through perforations that dot the tubes irregularly. It was initially produced in a set of 8 that included two different color combinations (red/white and black/white); a second set, in several more colors (red/yellow, blue/green, orange/purple, and pastel yellow/pastel green), was made a year later, in 2016. 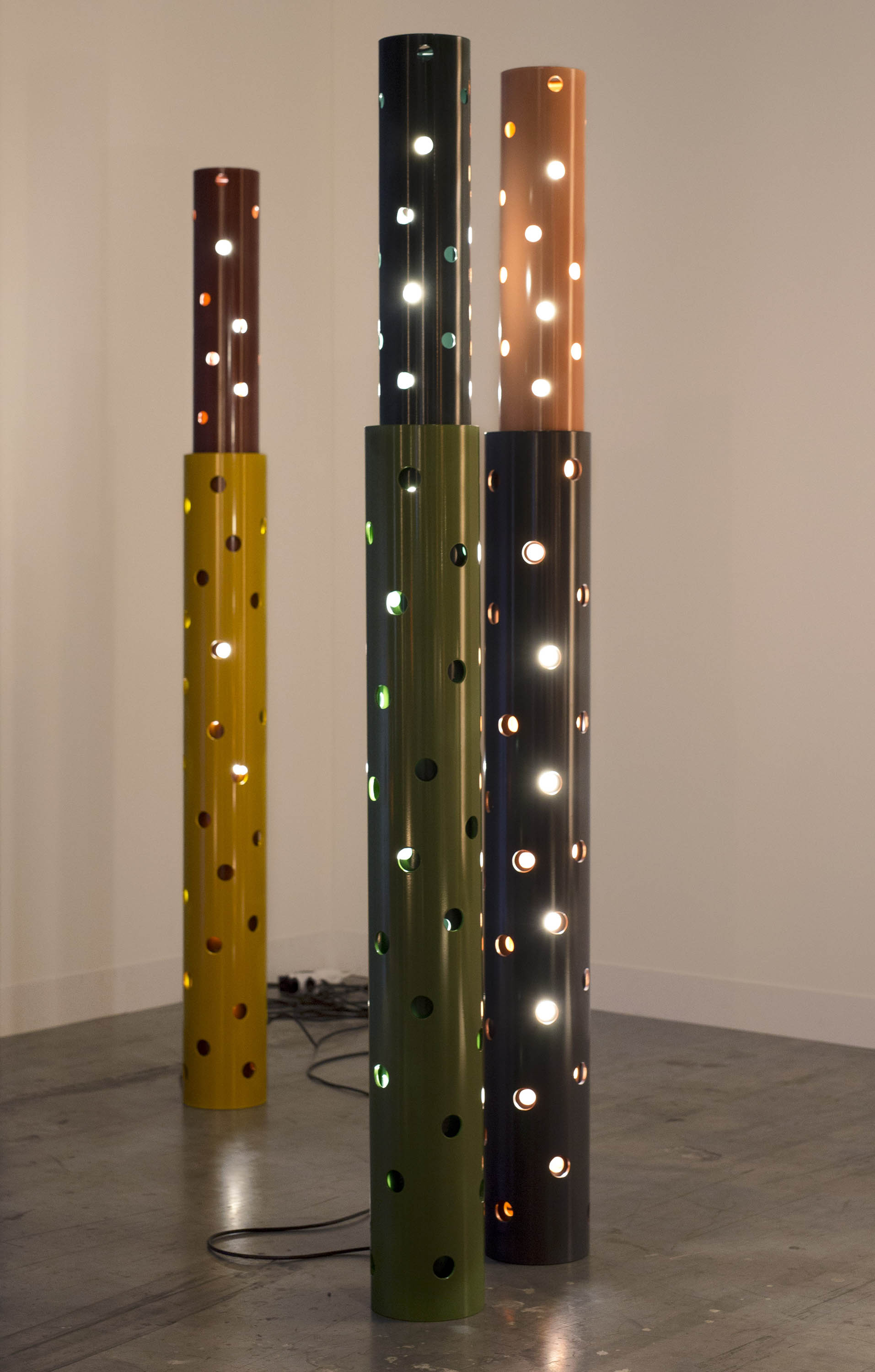 Olga’s outer tube can be shifted, so that the holes in both layers may be aligned or misaligned to varying degrees, adjusting the light that comes through them. A complex play of brightness, shadow, and color occurs where the holes are aligned: the light modulates the color inside the inner tube, making visible through different holes an array of different tones, and as it radiates out it gets partially reflected back by the outer tube onto the inner tube, giving it shine. The outer tube, meanwhile, casts gradations of shadow onto the inner one, creating a layered depth. Seen from far away, the lamp’s effect is, variously, one of bursting, twinkling, and glowing; and its bold colors and perforations give it a ludic effect, like a misplaced piece of a children’s playground.

In Olga we can perhaps glean Antunes’ affinity for Dutch architect Aldo van Eyck (1918-1999), an influential Structuralist who, among other things, developed hundreds of playgrounds throughout post-WWII Amsterdam, and whose Hubertus House (Hubertushuis) has been a subject of research and the locus of a 2016 performance work by Antunes (For a captivating view of the House, see a video produced by Antunes for the 2017 Biennale).

Although not a marginalized figure himself, Aldo van Eyck created architecture that served the marginalized in society. Designed in 1973 together with Theo Bosch (1940-1994), the Hubertushuis served as home for single mothers in distress, who could stay there with their children and receive support. The architecture, which was based on simple geometrical forms wrought in concrete and metal and enlivened by an array of bold colors, was attuned to its users’ needs and was supposed to encourage social interaction.

In their shape, material, and colors Antunes’ Olga lamps conjure the Hubertushuis’ aesthetic, and they also channel its history and relational quality through a personal prism: Antunes’ relationship with her daughter. Both literally and figuratively, the mother-daughter relationship structures Olga’s form. Specifically, Antunes’ height determines the height of the lamps’ inner tube, while her daughter’s—Olga’s—height at the time of the making determined that of the outer tube. Since the two sets of lamps were made with a year’s difference between them, the outer tube is slightly higher in the second set, and—surprisingly—the inner tube is slightly lower: Antunes discovered through making the lamps that while her daughter grew, she shrank. With the proportions of the tubes taking on this anthropomorphic dimension, the Olga commission becomes a record of a specific period in the ever-shifting relationship between mother and child; while the lamps’ mobile play of light, shadow, and geometry enacts the complex dynamics that characterize this relationship through an entire lifetime.